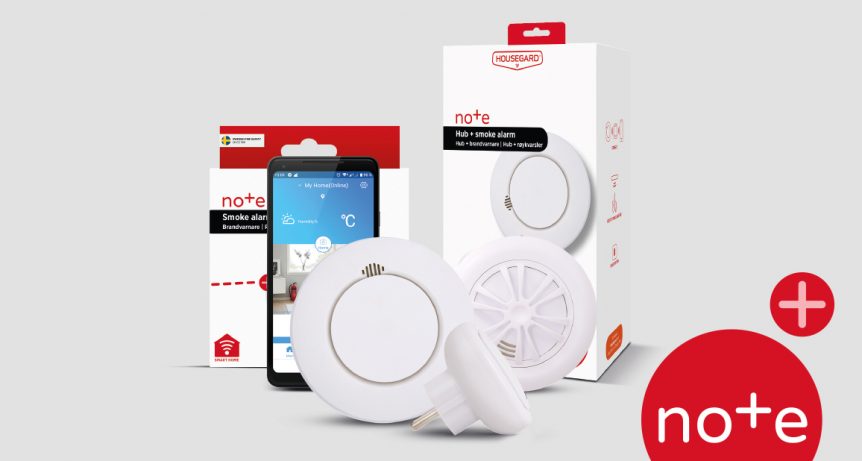 I recently bought two Housegard Note smokealarms, with the hub. They kinda works, but it’s not «Apple». Before I get to the Housegard, I will say something about my testing and choices so far.

In the last five years, I have tested four Fibaro smoke detectors. When I first bought them, there wasn’t a lot of choices – it was mostly Google Nest and Fibaro. Google Nest has a large size and it’s expensive. Fibaro was half the price, but required a Z-wave controller (that I already had).

The «nail in the coffin» for Fibaro and Z-wave, was when I understood that they can’t talk to each other. If one triggers, the other smoke detectors does not trigger. This can be «fixed» with a Z-wave alarm, but that also requires the Z-wave controller to be programmed and handle all the communication.

So… I needed some new smoke detectors

As I need between 16-17 smoke detectors to cover my home, I ended up with the choice between Nedis Smartlife Smoke detector or Housegard Note, because they have a reasonable price.

When a smoke detector becomes smart, it raises a lot of questions. It was pretty hard to find any information or reviews for Nedis and Housegard.

Here are some of the tings I found out when trying to do some research before buying.

– Can’t be serial connected
– Notification says «Stranger passing by» on the app, when pushing the test-button, on the YouTube review below.

+ Pause-function
+ Can be serial connected with/or without the hub.
+ Can have multiple sites and user control (like home, cabin…).
+ The app looks nice.

– Need a hub, as the smoke detectors communicate on 868MHz.
– One year of battery.

I had actually decided to buy Nedis, until I found the battery life in a brochure online. None of the 10 online stores I checked had written anything about the battery life. As the battery last for about 2 years on a WiFi device, there is no way there are continuous communication that allow serial connection between the smoke detectors.

Housegard looks like a Norwegian brand, so there is some safety there – but the smoke detectors are probably standard China-rebrand anyway.

The smokedetectors and their size

Compared to Fibaro or Cavius, they are large, but a bit smaller and the old ugly detectors. They just have a basic clean look.

For a low cost smoke detector, I expected some struggle, but not this much.

First I wasted 15-20 minutes failing to add the hub on my iPhone. As I had this problem on 2,4 GHz devices before, I had a solution… Get a Android-tablet. iPhone is most likely connected to the 5GHz network, so it can’t add 2,4 GHz devices then,

The app is pretty to look at, but it’s not self explanatory. I had to get the manual to understand how to add the hub. The manual (quick guide) is also outdated, as it says click on the Hub-configuration in settings, but in the app it’s called Netconfiguration.

I tried to make a video, just to show the hub, smoke detectors and app. I had to make it with a free editing software on my work-computer, so it isn’t the best video, but it will give you some insight 🙂

They are serial connected to each other. If one triggers, the other one also beeps. I tried the test with the hub disconnected and they work the same – but you don’t get an app notification then.

You can see the signal strength and battery level in the app, but that’s about everything you get – and of course status like Normal, Triggered and Offline.

They don’t have a tamper detection to see if their unmounted (as far as I know). So if anyone takes them down and hide them away, there is no way to detect that.

When I first ran the test, I got a notification on my iPhone: «OBS: Vær forsiktig. Mitt hjem Sokkel Gang alarm» (translated: Be careful. My home entry hallway alarm). I tested them about 10 times after that, but haven’t got any more notifications (bug?). If I try to look at the alert history, it’s empty on the iPhone, but Android-tablet have a list of all the testing.

I have written more bugs at the end of this review.

I have not tested them with real smoke or test-spray yet, as real smoke will damage the sensor and I currently don’t have a test-spray.

I have mentioned some things that doesn’t work as expected now, but they are all minor things regarding the hub and app. This are things that can be fixed with an software-update. Discard those issues, it looks like they work as they should.

Housegard has focused on fire safety since 1991, so I don’t doubt the smoke detectors them self is bad and I think they and the serial connection between them will work as they should.

So in all fairness, I would actually recommend them for this price range – but i really really really hope they would fix some of the app bugs. Looking at the alert history isn’t that important, but it’s kind a required feature for a smart smoke detector. Also getting notifications on my iPhone needs to work, to be called smart.

The app is so buggy and not self explanatory, that I think the developers never could have user-tested it.

The dashboard (Home / first view) on the app has weather and temperature. You can also add a camera-feed, which is pretty strange as Housegard don’t have any cameras in their products. If I would have designed this app, I would put the focus on the first view, the some detectors and their status.

The version log for iOS have 5 version-updates for the last 8 months. Last update was one month ago. It has one comment. Quickly summarized it says that the app needs some finishing touches, which is pretty much spot on.

It’s hard to mention all it bugs and quirks, but here are some of them.